During these years of existence IRCA has consolidated its institutional capacities and financial strategy and has strengthened partnership with several non-Roma organizations, and research centres and universities such as the Institute of Family and Neighborhoods Life at Clemson University in the USA, Peace Corps Volunteers, European University of Tirana centre, Institute for Democracy and Mediation, Institute for Change and Leadership in Albania while has expanded its network of Roma and non-Roma volunteers.

Thanks “Roma Initiative Office” Support during 2012 – 2018, IRCA increased a lot in terms of organizational capacities and human resources and has increased networking with key relevant actors in Albania, Balkans and in all over Europe and United States.

Furthermore, we have improved and consolidating the internal procedures and worked to reflect and improve our organizational strategy. We have shown a good record of transparency and accountability in managing the projects funded by donors and partners and therefore expanding the circle of partners and supporters that we work with. We have achieved to sign partnership agreements with important partners such as ; Albanian Ombudsman, EU-Delegation in Albania, World Bank, UNDP, Central Commission for Election, Ministry of Social Welfare and Youth, Ministry of Education and Sports, Ministry of Culture, Tirana Municipality, Durres Municipality, Fier Municipality, Durres University, USA Embassy, Commissioner for anti discrimination, etc.

IRCA is now part of three European networks such as PRECEDE and IRIS Network as well as Anna Lindh Foundation Network. In Albania IRCA is very active as well in Tirana Youth Leadership network. 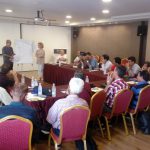 Insitute of Romani Culture in Albania

© Copyright 2019, All Rights Reserved. Powered by IRCA | Developed by Syntech